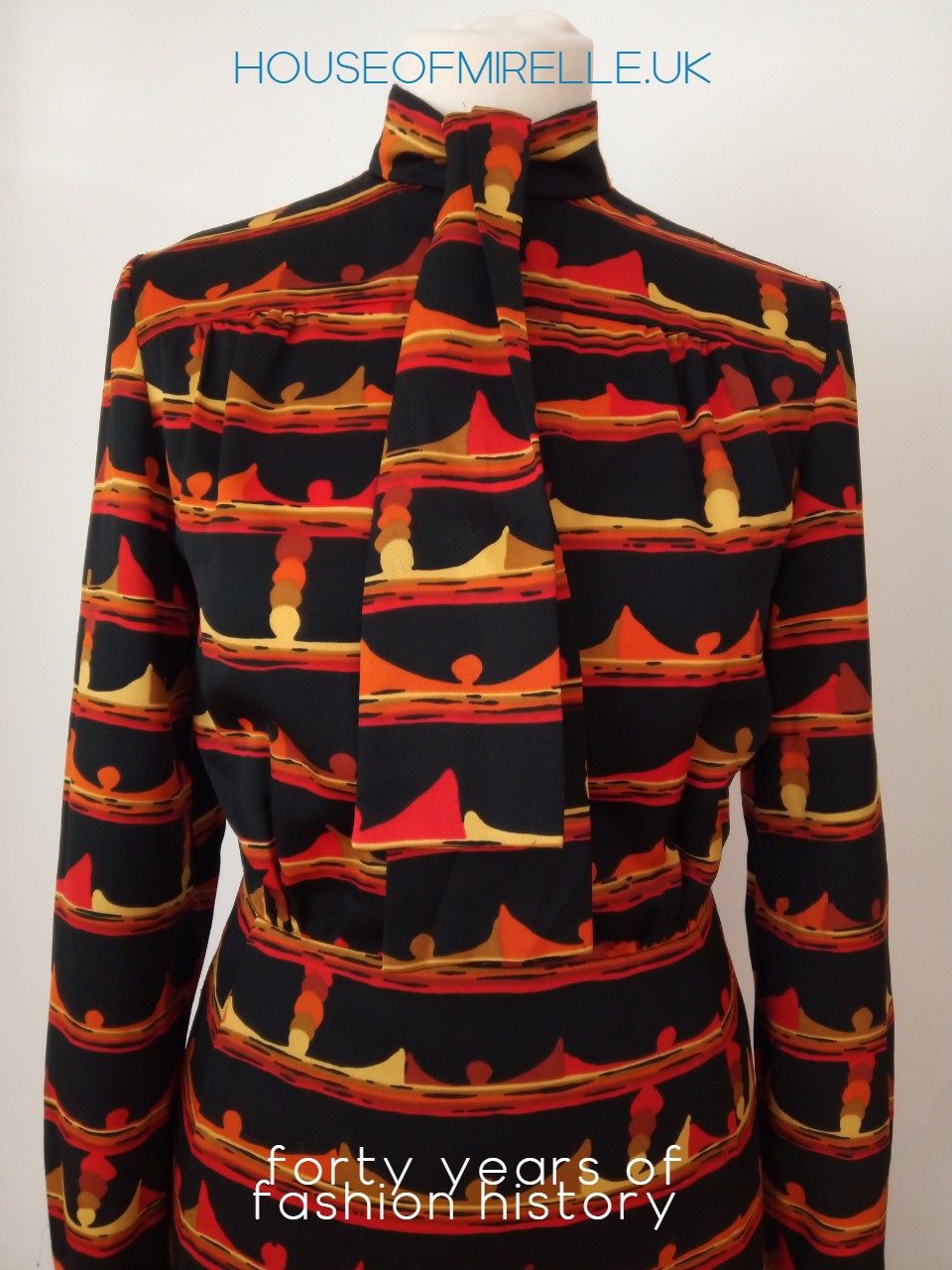 We’re very lucky to have a new donation we thought you’d love to see, bet your eyes are popping at how gorgeous it is!

The story about how it came into our hands is true of how many vintage clothes end up in people’s wardrobes, a happy accident looking through the shelves in a second hand market place.

Buying a label and design that no longer exists inspires curiosity about its history and the same is true for the owner of this Elka Couture dress.

Hollie Orsi contacted HouseofMirelle.uk through our Facebook page sending some photos of an Elka Couture dress she had in her wardrobe.

She bought it at a charity shop and no longer wanted it. “I’m not looking to sell it but donate it,” she said adding, “was wondering if you could share any history on it please?”

We arranged the donation and waited for it to arrive. While we did we started to answer by writing this page. It’s for you, Hollie, thank you so much for the dress.

A vibrant mix of orange, yellow and burnt sienna on a black ground the dress is a knockout example of 1970s fashion at its best.

It’s unmistakably 70s with a knee-length A line skirt, shirt-style sleeves, stand-up collar and a big tie-style bow set into the collar at the centre front of the neck. It hangs down the front nearly reaching the waist.

During the 70s clothes manufacturing became more streamlined than ever before. Factories capable of handling volumes of clothes churned them out in their hundreds every day.

The 70s was a crossover decade; it saw big changes to how clothes were made before that point, the 1980s changing fashion into the marketplace we know today.

What does Couture mean?

In Britain many fashion labels existed that had the word ‘couture’ included, Elka Couture was one.

The word ‘couture’ on a fashion label traditionally indicated it was a small, bespoke fashion design company that did everything in-house, ‘couture’ loosely translates to the word ‘sew’ by the way.

Unlike top end Haute Couture, ‘couture’ on a company a label didn’t necessarily ** mean each item was sewn to a woman’s individual measurements but did indicate there was a focus on doing everything in-house.

After choosing the fabric a small design team drew the style and shape. It was then handed to a factory attached to the company to cut, stitch and finish. An Elka Couture label added buyers viewed it at their offices in central London before choosing it to stock shops across the UK.

This dress doesn’t have a Mirelle label but Elka Couture was sold at Mirelle. We are happy to add it to our collection as an example of fashion contemporary to the shop that would or could have been sold there.

The scale of design was very different from now; now we have mass-market of fast fashion.

Fast fashion turns round the entire design and manufacturing process very quickly. Elka Couture was the opposite, they designed long in advance of each season making clothes with the time of year at the forefront, women shopped the same way.

There was a Spring/Summer and Autumn/Winter season. We think from the long sleeves and warm, synthetic fabric this dress was designed with Autumn / Winter in mind. British weather meant the woman who originally bought it could have worn in in Spring also; a flexible addition to her wardrobe.

The dress is made of a synthetic Polyester used in many clothes in the 70s, not only this dress. Quick to manufacture and easy to look after it was also an easy fabric to run through industrial sewing machines.

Hollie pointed out there’s no fabric care label and that’s right. Before the late 1970s to early 1980s there wasn’t a legal requirement to insert one as there is today.

Inside, the dress is machine-finished. You can tell because stitches by machine are more even and uniform than clothes made by hand or on home sewing machines. It was made quickly in Elka Couture’s factory, taking less time than a hand-made dress.

‘True’ couture was exclusively made to an individual’s measurements, finished by hand. This isn’t that sort of couture dress.

But it’s still very special. The fabric is unusual, consistent with Elka’s later clothing which had eye-catching, dramatic textile designs.

This dress was designed to be looked at and although classic in cut and shape, it was the fabric that made it stand out from other A-line dresses. The style of textile was popular around the end of Mirelle’s lifetime – between 1976 and 1977 Mirelle closed in 1978.

The biography of a dress is important, Hollie recognised its value and a decision to preserve it was made.

Soon after it was created fashion changed forever. It is, if you like, a last great example of how fashion used to work before we ushered in mass production of today.

In the days of fast fashion, clothes are cheap, production even cheaper, we discard a million tonnes of textiles every year.

The throwaway culture seen on the high street makes us nostalgic seeking out alternatives, bringing about the vintage revolution of recent years.

Pussy bows and ties around the neck are a modern trend seen in current fashions but their use harks back to dresses made in their first, 1970s heyday.

Owners of vintage clothing like our new Elka Couture dress ensure the past remains with us. Valued for eye-catching rarity of design Hollie’s donation preserves it for future generations to appreciate and enjoy.

Would you like to donate an item of vintage clothing to us? We’d love to talk to you. Go ahead and contact us through our social media pages. 🙂

** the word ‘Couture’ has many associations, Haute Couture indicating an intensive and expensive design and making process, for instance.

Wholesale Couture or Boutique Couture also existed in Britain in the late 40s, 50s and 60s, where companies adopted high class, intensive design and making practices sold into retailers like the House of Mirelle.

In France use of the word ‘Haute Couture’ is regulated. In the UK the word ‘Couture’ became a marketing approach adopted by companies indicating they made status clothing of precision, quality and class.

E.L. Hornik Ltd, the company owning subsidiary Elka Couture may have ‘borrowed’ the word to give an elevated status to their designs. Although suggestive of bespoke clothing it does not necessarily mean any of theirs were hand-made.