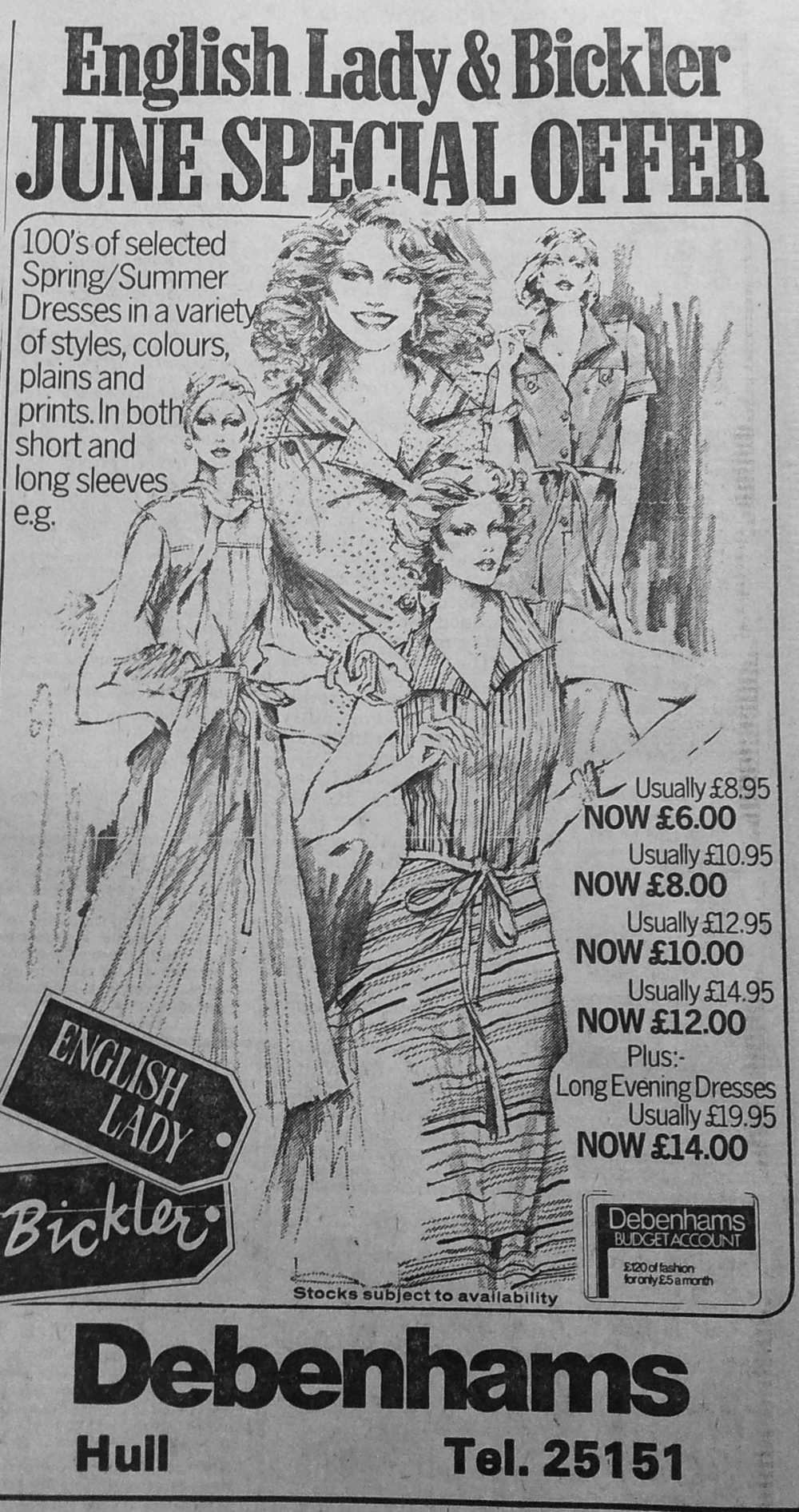 Hull Fashion History: What Was Great About 1978!

The 1970s was a decade of fashion extremes….

Floaty fashions of the post-hippy culture mixed with stomping platforms and glam rock but by 1978 when the House of Mirelle closed every inspiration was up for grabs.

By mid 1978 tailoring, disco and the romantic look had merged and Hull’s high street reflected the trends.

From Binns to Debenhams to Stuarts Outsize Fashions their stock was a snapshot of what was great about 1978.

And this advert for Spring / Summer 1978 shows the trends….

In 1971 Yves Saint Laurent launched a tailored look for women – think Bianca Jagger in a white trouser suit – and it affected the big collars and softly tailored lines seen in their advert in June.

At the same time the romantic look we now call Boho was floating through people’s wardrobes.

But perhaps what influenced Debenham’s displays most was the practical clothing of American Diane Von Furstenberg.

She said modern fashion had to be practical as well as stylish. The revolution hit our shores as much as it did across the pond.

The next advert comes from Stuarts Outsize Fashions, known as ‘Stuarts.’

At 47 King Edward Street it specialised in dressing the larger lady.

We can see in the advert they stocked everything from trouser suits to ponchos, knee length skirts to hats.

Their Spring collection was as stylish as any other on Hull’s high street.

It wasn’t all about clothing though – hair got a look in.

In the year that launched Sci-Fi’s most successful franchise wrapping plaits around your head was already de rigueur before Princess Leia arrived on the big screen.

Ladies of Hull were tapping the streets in high heeled strappy sandals.

T Bars ran up the front and polished toenails peeked out.

They were perfect for dancing to Chic’s Le Freak!

Coats were designed with hoods attached.

They were non-detachable and set in to the main body of the coat.

Using large amounts of fabric they hung wide and loose from the shoulders right down to mid calf length.

Blanket Coats were warm and stylish, perfect for the long winter months.

But perhaps the trends that stick with us were in C&A.

Jeans, skirts and T Shirts – these are the fashions we wear today!

1978 was the year when everything changed.

It was the last year of the House of Mirelle.

With its closure Punk and New Wave were already making changes and the era of Princess Diana and the New Romantics were on their way.