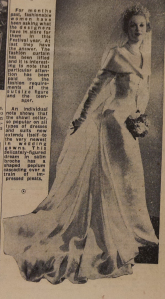 Wedding dress styles change more slowly than everyday fashion. These three outfits show that style responded dramatically to social changes between the beginning of the 50s and the end.

The first, from an article in the Hull Daily Mail of 1951, reintroduces the idea of a long white wedding dress to the public after the austerity of war years and clothes rationing.

This dress would have been considered a luxury during those years, unpatriotic even.

During the war fabric and clothing was rationed and people got married in uniform, borrowed dresses or wore new outfits that could be worn again and again.

Occasionally parachute silk was found to make a dress for a proper white wedding and afterwards the dress would be passed around friends and relations.

At the end of the 1940s the fashion for and ability to buy or make white wedding dresses returned, although the design of this dress retains the 1940s slim and neat lines keeping fabric use to a minimum.

This dress has a shawl collar which featured throughout fashions of that year including in overcoats which in 1951 had large collars to keep the wearer warm.

At the wedding of Shirley Scott and ex-Hull City player C L Robson the bride wears a more elaborate dress.

Created in many layers, it has a full skirt underneath with a decorative net / voile over jacket and skirt on top. You can see the decorative flourishes in the fabric on the sleeve on the bride’s arm.

Frills and ruffles around the hems added to the fullness but the collar and bodice remained modest, buttoned up to the neck and finishing in a mandarin collar.

The long veil and a full bouquet was a must.

By 1955 the austerity of the war years were more distant in people’s memories and pockets.

The stability, optimism and expansion of Hull throughout this decade was reflected in the fashion for more extravagant weddings.

This dress would have cost more to buy or have made than the simple choices from 1951.

In that year, home sewing was still widely popular and skilled dressmakers existed  in Hull to help you create the outfit for your special day.

Miss Humber, writing a retrospective in Hull Daily Mail of December 1959 said the decade was distinctive because of how young people – teenagers – asserted themselves for the first time.

Young people, teen fashions and the ‘Beat Look’ meant that by the end of the decade fashion had changed enormously.

Gone were frills and elaborate dresses in favour of simple, clean lines.

Dior’s Trapeze Line was a huge influence and was soon seen in a reduction in the full fabric skirts and petticoats that were worn throughout the 50s.

Attitudes had also altered towards the ‘proper’ way a bride should look at a wedding.

As a result, skirt lengths had decreased, a veil was no longer necessary and the young set wore wedding dresses that could easily be seen at other occasions; both practicality and romance was key.

The necklines were simple and as in this bride’s dress, more exposing of arms and decolletage than ever before.

Although simpler than the dress of 1951 or 1955, the bride added a frill mid-skirt with a ribbon running through it which is an individual twist.

There’s no veil either. She is wearing a hat which sits on top of her long hair in an easy-to-do hairstyle.

Teamed with the shoe of the late 50s, the stiletto heel, the look is young, modern and cool.

It’s not only the bride –  look at her husband’s outfit. He is wearing a slim line jacket and trousers in a suit that would not look out of place in 2016.

In previous weddings and the previous years here, the groom’s outfit was not the focus on the day. It was all about the bride.

Morning suits or suits that mirrored the day suit were commonly worn by men on the big day and it was the bride that drew ‘ooh’s and aaah’s from those attending.

However men’s fashions in the late 1950s was also changing – they were interested in making a statement too.

Both of these outfits at this wedding were so very modern and young.

It was bang on trend for 1960 and has an unmistakable look that heralds the youth revolution and fashion in the decade to come.