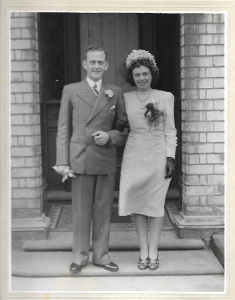 Anne Kettley talks of her mother’s dressmaking skills with pride: “she didn’t know how to do anything else,” she explains, “but working at the House Of Mirelle must have been the start of it all.”

“She couldn’t do embroidery, knitting or tapestry, all she could do was designing and making clothes.

“We never had to shop for clothes, she made all of them. I’ve got photos of some of her designs but I don’t know who it is in most of them.”

Anne’s Mum, Beatrice Sykes has always been known as Betty. When she married on 25th May 1942 and became Mrs Bartlett, Hull was struggling with beginning of the World War and in the midst of the febrile decimation of the Hull Blitz.

It was not an easy war for anyone living in Hull, particularly for the Fire Wardens employed by each business and factory. They were required by law to be installed outside of working hours to watch for incendiaries and fires.

This was a dangerous job and the start of war would have kept her very busy.

Manned with a bucket, a stirrup pump and keen eyes she joined other women across Hull who followed up their working day by sleeping at their workplace. While the men were away they watched the night sky for bombers and fires that could threaten the City.

Albion Street, located slap bang in the centre of Hull, was the location of the House Of Mirelle in its early years.

Albion Street was also one of the most heavily bombed areas in Hull.

“She used to say that she didn’t know how they survived, now I know why,” says Anne.

Being a fire warden was a far cry from the exquisite, fine and defined skills she used by day in the late 1930s and early 1940s.

Employed at the House Of Mirelle, she designed and made clothes for the middle and upper class woman of Hull.

“She didn’t like to work from patterns,” Anne explains talking of her mother’s expertise in taking a design to completion. A wedding dress for instance, would have started with a bespoke pattern created entirely from an individual’s measurements.

This is a skill dressmakers, fashion designers and couture houses use to this day.

“She made her own wedding outfit when she got married,” says Anne, “the dress was in a turquoise embossed velvet. She made the hat and the bag as well. ”

Following the social convention, Betty left the House Of Mirelle after she got married. She worked in Durham for the war effort but her skills as a dressmaker were in constant use in the years afterwards.

She designed and made clothes for people from all over Hull, often for special occasions like weddings.

Some of the designs are seen in from the photographs that her daughter has kept in a special box since her passing away.

“I wish I’d kept a record of who everyone was,” said Anne, “but you know how it is when you are a child.

“I know some things about some of them. Maybe someone will be able to tell me who they all are.”

Anne’s friend Lynne Devaney is one person Anne doesn’t have to search for.

Her Mum, Mary Ashton married the love of her life, Ronald Ineson at St Alban’s Church on 23rd September 1950.

Betty made her mother’s wedding dress and going away outfit, the traditional wedding outfits for that era.

Married in white, the dress had a lace jacket with a peplum waist and long skirt.

Her going away outfit was what was called a ‘costume’ during the war years – a skirt suit.

“She had lots of lovely comments about it,” says Lynne and continues with another memory about her mother’s life before she was born:

“Mum said she had to save up her coupons for her dress and wedding cake. Betty taught her how to cook and clean I believe.”

Clothes rationing was still in place in Britain in 1949 and food rationing remained in place until 1954. Her mother would have had to save up coupons as well as the cash to make the clothes and provide the food at the wedding.

This was a sign of how important the day was for her. Many women decided against following this tradition for weddings happening under the restrictions of post-war rationing.

Anne and Lynne have been friends since childhood and both share a respect for her mother’s dressmaking skills. “I can’t make clothes myself,” says Anne, “I didn’t have to.”

As we continue to look through the photos, Anne talks about a women standing on church steps and smiling, wearing a wedding dress Betty also made.

“Her name was Minnie,” says Anne, “ I used to love that photo when I was a child. Mum said she was lovely. Maybe that’s why I liked the photo so much.”

She carries on, “the tinted photo of my Mum as bridesmaid was taken at a friends wedding in 1939. She made all the bridesmaids dresses and the bride’s gown. She was good friends of my Mum.“

I mention the halo hat her mother is wearing which was the height of fashion in 1939 and 1940.

As I look closer it becomes unclear to me whether one particular photo is of the same wedding, as the bouquet Betty is carrying is different between the both.

“Is it a different wedding,” I say, “the outfits look different.”

There’s a pause while both of us think.

“Look at the bouquet she is carrying!” says Anne, all of a sudden. “It’s the same one that the bride is carrying.

“She must have caught the bride’s bouquet because it’s different from the one she is carrying in the bridesmaid’s photo. It’s the same wedding but taken later on.”

We take a moment to absorb this information, seeing in the photographs a story from the day that her Mum hadn’t shared with her daughter.

“The last dress she made was mine,” Anne says.

“I got married in 1974 and Anne Of The Thousand Days was a film I loved, so she made my dress like that, like Anne Boleyn, with long sleeves and everything.”

“I can’t believe this is happening now, especially when she would have been 100 years old in April,” she says, whistfully.

“If you could find out the names of some of the people in these photos, that’d be great. I’d love to find out anything.”

Can you help Anne identify who it is wearing Betty’s designs?

Do you know any of the people in the photos?

If you do, contact us to let us know!