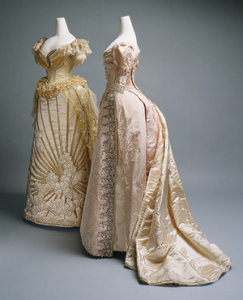 Fashion History: Charles Worth, IncSoc and the Legacy Of Couture.

Shopping expeditions to the high street or browsing online to buy that must-have pair of shoes is far away from the couture shopping experience.

“Couture” or hand-made clothing made to an individual’s requirements is every bit as glamorous as it sounds and its history is not entirely French.

Although ‘couture’ is a French word meaning ‘sewing’, the business was widely thought to be invented by a British fashion designer called Charles Frederick Worth.

This grand-sounding gentleman worked as an apprentice in various textile merchants in the 19th Century. While he was learning about fabrics, a skill essential for any fashion designer, he visited art galleries and studied portraits of historic women. He was consumed and inspired.

The House of Worth

On moving to Paris in 1845 he set up a small dressmaking department in the firm Gagelin which was so successful that by 1858 he’d branched out on his own. The ‘House Of Worth’ is widely regarded as the first couture house in history.

His creations were so extraordinary that they were received with acclaim. French royalty ordered and bought them, American women flocked to Paris to view and buy and European aristocracy bought and wore House Of Worth creations.

His fashion house had a strict heirarchy of ‘hands’ or employees, a Directrice – or head salesperson who was in charge of selling the clothes – and their skills were second to none.

His garments were extremely expensive, exclusive and completely out of reach of the average woman. They were living works of art.

Realising they needed to safeguard the standards associated with the name couture, Le Chambre Syndicale de la Haute Couture established a set of guidelines. Anyone calling themselves a couture house must adhere to them. These rules were tightened up in 1945 at the close of World War 2 and are still in use today.

Parisian fashion held the world in it’s hands. By the 1900s it was simply the centre of fashion worldwide.

But Britain wasn’t forgotten – it had its own couturiers too.

In 1941 they became the founder members of the Incorporated Society of London Fashion Designers – or IncSoc. These designers were asked to create patterns for Utility clothing under the clothes rationing scheme in World War 2. The results of the CC41 designs have remained in the British consciousness since.

They used quintessential British tailoring skills to create a wardrobe that was simple, understated and elegant. With the Utility scheme for the first time couture creations were entirely within reach of the British public.

The House Of Worth was by no means the only or first fashion house but Charles Worth was such an extraordinary publicist that his name has been associated with the establishment of couture fashion since.

His success is also a story about how a couture fashion business relies on publicity and promotion, social connections, reputation and word of mouth recommendation.

It was as vital then as customer service and branding is now.

Mira Johnson, Directrice of The House Of Mirelle followed in his footsteps. She was the power behind Hull’s fashion house.

It was she and the talented staff working there who made a success of the House Of Mirelle.