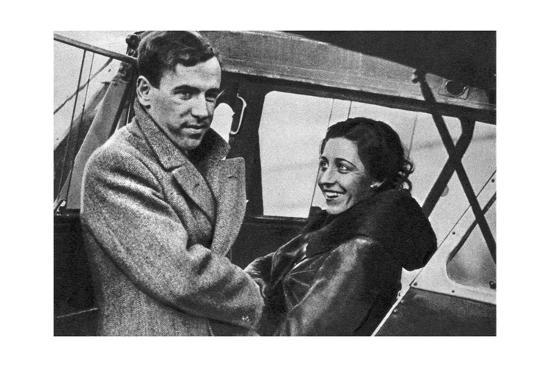 Amy Johnson was used to looking at life from a distance of miles. She and her husband Jim Mollison saw the world spread out beneath them as they zoomed from England breaking records for long distance flights.

She was famous, so was he. In the 1930s they became the original glamour couple talked and written about like film stars are today. Dashing and daring their escapades suited who they were; Amy, an adventurous Hullensian feted by the city of her birth. Jim a charming Scotsman with a big personality, who loved the high life and trappings of fame.

They had everything in common, the world thought. Theirs was a marriage of passion and talent, engines and starting blocks and long hours poring over maps planning their next record-breaking trip. Cameras and newsmakers followed them everywhere marvelling over what would come next.

Exhilarating and risky their success had a down side. Amy was not happy, in 1938 she and Jim divorced. Her life travelled in one direction and his another, ending up in a small town called Surbiton in Kingston upon Thames miles away from Scotland or Hull.

His later years were as quiet as the small town’s streets. Planes were built 2 miles away in Kingston’s Hawker Siddeley factory but the heart of Surbiton was the railway that ran from London past its Art Deco station to Surrey and the South Coast.

Bright and white the clocktower stood as tall as ships masts. Named after its church, St Marks Hill ran towards it, St. James road and St. Philips Road parallel to the high street called Victoria Road.

As Surbiton grew people moved in, builders connecting streets with rows of houses extending down to the River Thames. Two cinemas were built to entertain locals, one on St. Marks Hill near the church. Rail travel meant business and hotels appeared, including the Carisbrooke at 3, St. Philips Road.

Here Jim Mollison landed in 1956. The last job of his life was to run the Hotel and keep sober, alcohol banned. But pubs lined the high street doors open and welcoming to anyone travelling past. His life ended in 1959.

50 years later much has stayed the same but much has also changed. The Carisbrooke no longer exists, one cinema becoming a Waitrose and the Roxy is now the Coronation Hall pub on St. Mark’s Hill.

Since opening in 1997 it celebrates its showbiz past; picture frames line the walls with snippets of history, old fashioned cine-cameras above the bar. Famous people look out on the entrance, stairs the same as ever, people sitting in booths with props and biographies all round them where ticket offices once were.

Above table 6, 3 pictures look down behind glossy glass. There Jim Mollison is remembered and Amy Johnson, ‘The Flying Scotsman’s’ life set out in a few paragraphs.

His face is rugged, hers smiling and bright instantly recognisable as the first woman to fly alone to Australia, setting off from nearby Croydon Airport on 5th May 1930.

Next to her his achievements seem carefree and wild:

“…he became a precociously young RAF office, a hippy in Tahiti, a Bondi beach attendant, a flying instructor and a speedway ride. He became a pilot with Australian National Airways when it was formed in 1930 and became “the most accomplished long-distance flyer of his era.” She died bravely, during wartime flying in 1941.

Mollison’s biography by David Luff is titled MOLLISON THE FLYING SCOTSMAN, published in 1993. Its pages tell of the man who accompanied Amy through many of her exceptional flying-feats but Surbiton has not forgotten either, remembering him on its popular pub wall.