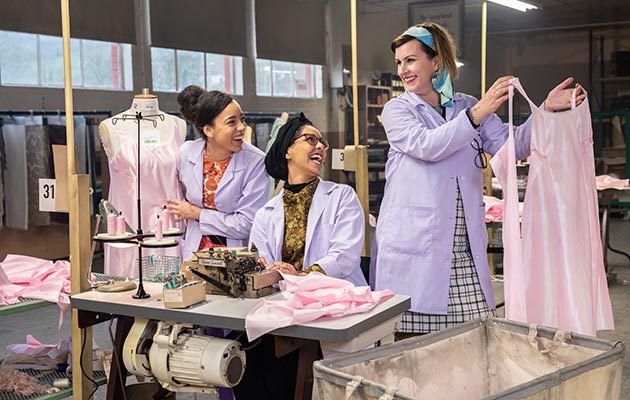 TV Review: BBC2s Back In Time for the Factory Returns To Womens Working Life in 1968

11 or so ladies walk towards the doors of Valley West wearing an impressive array of 1960s fashions and expectant smiles.

They are stepping back in time to experience what working life was like for garment factory workers, ladies who sat at industrial sewing machines for 8 hours at a stretch churning out clothing for Britain’s high street.

Sisters Tamara and Angelea Brabon’s faces say it all. They work in 21st century office jobs, Tamara, 19 year old Factory secretary recognises a stapler amongst the office kit but that’s about all.

The others collect around Union Special machines stretched out in rows as far as the eye can see.

“I’m hoping we’re not making these,” she says running her hands over the hem of a bright orange negligee, “because this is slippy fabric with stretch in it, feel the stretch?”

We hold our breaths with her. She knows her stuff but others are staring at the hefty machines as if aliens have landed.

In the late 1960s synthetic fabrics were cheap to use and ubiquitous in shops, the ladies are wearing some of its  choice examples, we wonder how hot they are getting under the lights.

It’s no fun, especially if you are 7 months pregnant like Cass.

The chairs are uncomfy, fingers dangerously close to needles punching holes into cloth with the speed of a diesel engine powering through their home country of Wales.

Clothes were made in components with each machinist tackling one part of the process. 85% of the clothes on the British high street were made in British factories like these.

“Well I was thinking of the money and the wages,” says visitor Sonia Gould when asked how she dealt with the boredom in the trouser factory she worked in then.

12 women produced 20 pink slips an hour in 1968 but that was with staff members who knew what they were doing. These are given a target of 10 an hour, reasonable we think, but a challenge to them.

Will they reach it by the end of the week? It’s Supervisor Liz’s job to crack the whip.

It’s not all about the factory, it’s also about women’s lives. After a hard day’s work Emma – Tamara and Angelea’s Mum – goes home and has to cook tea. Dad Jason puts his feet up and reads the paper:

“No teamwork” she says to camera, thinking about the difference between how life is in 1968 and how it is normally.

The decade is different but it’s reach-out-and-touching distance for many of us viewers.

In our lifetimes the disparity between men and women’s pay and sex discrimination in the workplace has been erased.

No girly calendars stare down at us while we are typing and our wage packets are the same as men employed to be pattern cutters and technical help if the machines break down.

“I wanna go back to 1968 and get the ball rolling, give ’em a bit of strength,” says Angelea, with a look of desperation in her eyes.

We smile and nod along with the comments made, their efforts at sewing, how much fun they are having and think of Lillian Bilocca another woman who in 1968 railed against social injustice and fought for change.

There are differences already; hairnets on the ladies hair as well as bright blue overalls and the trousers they are manufacturing are wide and orange.

“Those were the days my friend,” sings Mary Hopkin as the ladies sing along.

Will it be next week? We’ll have to wait and see…

Like
Spread the love
BBC2 Back In Time For The Factory The Headscarf Protest Hull The History Of Sewing and Tailoring Women's History
Search
Join Us On Facebook
Read
History In Pictures
Twitter
Tweets by HouseofMirelle
Fashion Illustration: 1951 Mirelle Dress