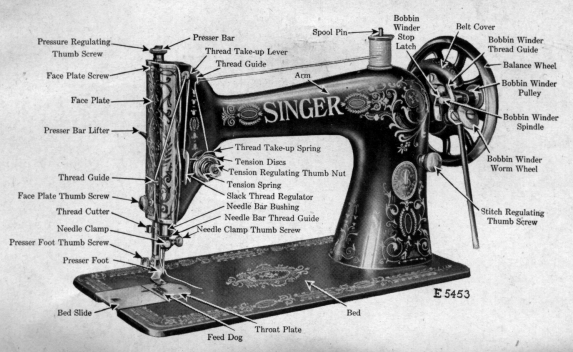 Recently we’ve been chatting to the person behind the fantastic blog Witness2Fashion  about all things ‘treadle sewing machine.’

Based in California you might expect a difference between the UK / Hull Yorkshire but I was struck by how similar they were.

In comparison with the plastic versions sat on our table tops, treadle machines appear large and cumbersome.

There is an upper section – the machine itself – which sits on a built-in cabinet and a section underneath made of cast iron.

Some had a motor attached but originally they were built as a manual machine; to use it without electricity requires you to learn some adept foot, hand and eye co-ordination!

The history of sewing machines

Read this great post on Witness2Fashion “Thinking About Sewing Machines”  which takes you through their history in words and pictures.

Treadles and The House of Mirelle

Researching The House of Mirelle has included a lot of discussion about treadles; a sewing machine manufactured in the 19th and 20th centuries by big names like SINGER.

When our post about the Orphan Sewing Machine  was published it prompted a flurry of comments and likes.

Sewers recognised the photo instantly: “that’s the one I learned on!!” someone said in Australia fast followed by “me too” by someone in Yorkshire.

Far from defunct treadle machines travelled the world and are still used today.

Here’s what Witness2Fashion said about their experience:

“I was one of those women who made part of my college wardrobe on a treadle sewing machine which we had in our basement. (I graduated in 1966.)

“I later became a theatrical costume designer and teacher, and sometimes wished I still had that machine, because you controlled every stitch. You controlled the speed. Great for sewing in tight spaces, like children’s armholes. And you got some exercise while using it!

“Yes, you had to get it started by turning the wheel by hand, but unless it came to a complete stop, it would continue to respond to a foot on the treadle.

“Of course, it had no reverse (you raised the foot, pivoted the fabric 180 degrees, took four “backstitches” and then pivoted it again to secure the seam with four more stitches along the same line.)

“Not fun if you were making drapes or something bulky and heavy! It didn’t do zig-zag, so I avoided patterns with buttonholes, but it was fine for putting in zippers.)

She added: “I think the museum may have rejected the treadle sewing machine because there were so many thousands of them that they are not rare.

Pointing out that in some economies and areas of the world having the ability to sew without electricity is essential:

“There are many places — even in the “developed” world, without a steady supply of electricity.

“This week I heard and saw several news reports about digital money — how we won’t need a cash economy in the
future because everyone can pay bills and buy groceries with their phones now.

“And all I can say to that is, what if the power goes out? The island of Puerto Rico was hit by a hurricane months ago, and electricity has still not been restored in many places. If they had to have WIFI to pay for everything…

“I was surprised how much I learned (or had my memory jogged) from old sewing machine advertisements.

“P.S. In early factories, all the machines had to be lined up next to the pipe line that supplied steam.( My source is a Time Team episode.)**

“Perhaps sewing machines were designed with that single power source in mind and the design was never re-considered for electric machines?

She finished by talking about the treadle in her home:

“Ours was probably from the 20th century, so not exactly like the really early ones.

“Even more amazing to me were early portable machines that were cranked by the operator’s right hand while the left hand steered the fabric. That seems so counter-intuitive!”

Thank you Witness2Fashion for sharing your thoughts and experience.

The treadle is a global leveller and like the machines themselves memories of using them last.

Whether it’s the physical action, the machine itself or the clothes that were created people’s recollections appear fresher and stronger than using modern ones.

** 11/1/2018: after publication Witness2Fashion contacted us to say that she thought the Time Team episode was Series 13 Episode 3: Rubble At The Mill / Manchester Cotton Mill.

We recommend watching it. It uncovers the social history and working conditions of the people working in the 17th, 18th and 19th Centuries when the cotton and textile industry turned a small town into the bustling City of Manchester it is today.