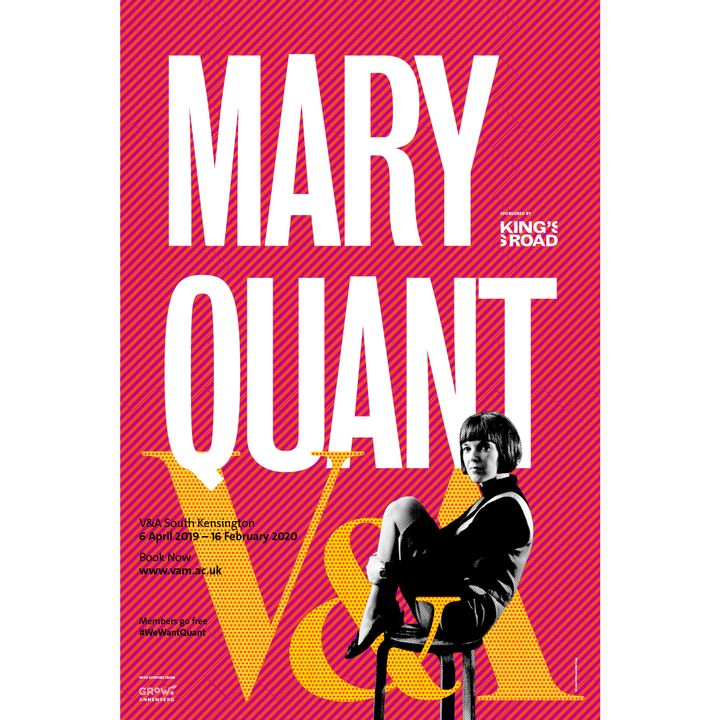 “There she is!” says a woman entering the V&A Mary Quant exhibit to her friend. Tucked behind the V&A’s permanent costume collection they’ve patiently queued for the moment they can enter. On until the 15th February the exhibition is short of time, but it’s a colourful and comprehensive run-through of Quant brands between 1955 and 1975.

Mary Quant is such an iconic name in the history of British fashion she needs no introduction. Her cropped Sassoon bob and simplified Daisy logo has sunk into our consciousness to such an extent it seems impossible that there was a time when the influence of her designs was not being felt.

The exhibition focuses on the golden years, the years of the Ginger Group, Puritan Fashions and ‘The London Look’ but there’s a surprise in store. Using the hashtag #wewantquant the V&A asked for your Quant outfits. In the cases among familiar 1960s dresses, 1920s shifts and tailored work wear there are ordinary people’s outfits and the stories that went with them as well.

If you remember Quant in the 60s then you were there. That women have kept outfits and recall so strongly why, where and when is as inclusive and as much a part of this exhibit as films and quotes and outfits stored by the V&A.

She would like that, her success represented a change of fashion culture from the ground up. At a time when the industry was dominated by a top-down system of couturier to high street she bucked against all that carving out a method of making, selling and publicising that captured the imagination of girls swooning over Elvis and refusing to wear ‘Mother’s Tweeds’ one moment more.

Her partner for life and business Alexander Plunket Greene took London by storm, stitching and designing using one sewing machine in a cramped bedsit selling fashions into Bazaar, their first outlet.

Quant folklore like this is covered but walking round the cases information is detailed, more than repetition or a memory-jog. Bursts of colour and individual outfits grab your eye but there are muted tones and fabrics; expert design and tailoring.  Outfits like “Bank of England” a waistless shift dress with a huge puritan-style collar seen in the pages of British Vogue in 1962 are expected but there is much more.

It’s interactive as well. Their sweeping invasion after “1930-54” when “London was a bombsite” has a black and white film of the front of Bazaar so large you stand following the camera down a rainy Kings Road. It’s an eye to the past older ladies carrying umbrellas in their 1950s swing coats walk near mini-dresses in their window. You can see why it caused such a stir.

The philosophy behind Quant’s decision-making doesn’t seem that groundbreaking to those of us living with mass-production but back then it was, so one of the surprises is that it was not from the start that she broke the rules.

There are two party dresses displayed in a case titled ‘Death of the Debutante’ which make you double-check are Quant. They are typical of beautiful designs seen everywhere in 1959-1960, the year they were bought. However it does hint at one of her successes; collaborative work. Rayne & Co. – shoe designers to the Queen – had a partnership even then; those displayed are for the Miss Rayne brand.

Walking round you see plastic collars on dresses, childlike crayon-coloured stockings and upstairs, tights teamed with outfits so short as to make older ladies baulk. They are the outfits made famous by Twiggy and worn by Mods.  To the establishment she was unthinkable but to the ‘Young Set’ she was a goddess. The same women 50 years later with greying hair and skinny jeans follow her story round.

Ruefully one woman says, “Back in the 1990s I bought one and I got rid of it. It was out of fashion. It was green.”

Another says, “I wore dresses like that when I was pregnant.”

Someone traces the line of one of Quant’s Workwear dresses with her finger, “I always associated her with straight skirts.”

“You have to have the shape,” replies her friend. She’s right. Each outfit including a 1970s strapless maxi makes you question how they would have looked on a woman who was not tall and slender with small boobs.

Only one voice of dissent is in the crowd. A fashion student says to his teacher, “But it’s sooooo dated,” a disappointed and impatient note in his voice, she doesn’t blink as she looks at the same dress in silence. When she doesn’t answer he walks off.

The familiar trips up our thinking, the exhibition does well to remind of her work outside the well-known. More wearable items surprise when you see that anyone of any age could put them on. It is the power of publicity that makes them invisible Quant’s fashion was a return to innocence but also fresh and – using one of her favourite words – sexy – a new uniform far away from the curvature of 50s screen icons Elizabeth Taylor and Marilyn Monroe.

From 1966 British model Twiggy wore Quant so as so make their brands synonymous and by the 1970s her 1963 Ginger Group had diversified into all things girly; make-up, hair ranges, shoes and leg-wear; it was a multi-million pound brand.

The exhibition claims as hers one of fashion’s greatest controversies; did she invent the mini-skirt. Parisian Courreges took first dibs in the midst of the Swinging Sixties a battle between cool Britannia and France. Women wore skirts on the knee in the early 1960s but her simplistic rationale holds the truth; she saw what young girls were doing, taking up hems and followed suit.

But it seems there might be another scandal; did she invent the Maxi dress as well. A case so stuffed with reds and oranges as to make you feel you are looking into the sun has a dress called Sardines. Designed to be worn either during the day or in the evening at least 3 years before they were widely seen. We walk away thinking, “can we attribute Maxis to Quant now too.”

Her approach was always revolutionary; arguably Quant paved the way to Punk. The exhibition nods to her Wet Collection full of the same PVC we saw 15 years later wrapped round the bodies of men and women stabbed with safety pins and sugar-rigid hair. Her 1969 X-Certificate black catsuit does that again, no doubt seen by the young Vivienne Westwood as she fantasised that other great Kings Road fashion revolution – Sex.

The exhibition finishes with a finale of licensing, bags, make up and Daisy Dolls as well as her partnership with paper pattern maker Butterick the way everyday girls could afford her mid-price designs by making them at home. The 70s are not as well represented and the 50s also. It is the 60s that stands out from this collection and the memories with them too.

The V&A says the Sixties revolution was as much down to Quant as the pill, the Summer of Love, the Beatles and the Stones. The entire exhibit is exciting, fresh and fun, a twenty year story well told. You never had it so good!

Buy tickets to the exhibition here: