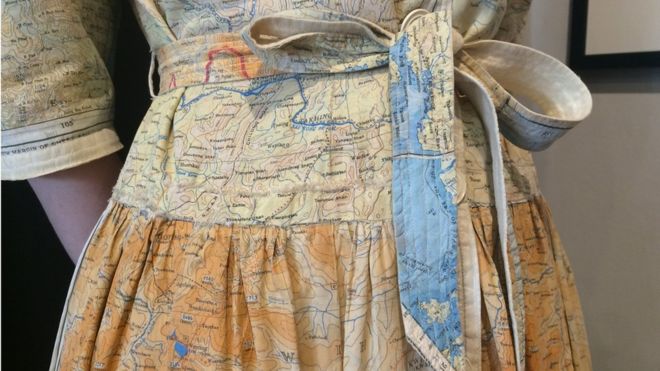 World War II was a time of extaordinary hardship at home and abroad, millions fighting against Axis forces across the world.

But it was also a time of great ingenuity, no more so when the British Government equipped men to do their jobs by using maps printed on silk.

Woven by silkworms the sheer fabric had gossamer-like qualities transported from China across the Silk Road.

From June 1941 clothes and fabrics were rationed on the Home Front. Silk sourced from the Far East was in very short supply and Art Silk – Rayon – became more and more popular, used as a substitute.

Also rationed it replaced one of the most expensive types of fabric. Used in dresses and blouses throughout the war, Artifical Silk set us out on a different journey towards man-made fibres of the post-war years.

But real silk was not forgotten. Scant supplies were put to use in the war effort, folded into the pockets, shoes or tucked away to help British airmen return.

Ingenious and eccentric, Clayton Hutton thought silk could help his men.  An Officer in MI9 – the British Directorate of Military Secret Intelligence – he was tasked with supporting resistence fighters across Europe.

From his office men were scattered across Nazi occupied countries. Carrying out dangerous missions, they bravely parachuted into enemy territory carrying false passports and documents to help downed airmen find their way home.

In the darkness of night, men and women created chains of escape. Highly risky if caught, execution an inevitable outcome of being found.

Maps were essential and this was Hutton’s plan; printed on silk they were light and durable, folded down to a fraction of a paper map’s usual size.

Tucked into mens’ uniforms escape and evade maps joined them on their descent into enemy lands.

After the War rationing didn’t end, some maps making their way back into women’s hands.

The large pieces of printed silk were as valuable as parachutes for making special clothes and ladies rose to the challenge.

Lady Mountbatten used one to make cami knickers and a bra. After years of rough lingerie made to rationing specifications it would have felt luxurious, soft and light on her frame.

Another lady made a wedding dress, crossover front fitted to her bodice and another a dressing gown, trimmed in contrast black.

For sale in Harrogate

In 2016 a dress was auctioned in Harrogate, Yorkshire. Expertly made from one such map it had  3/4 length sleeves, a long and full skirt, belt and drop waist.

Sparing nothing even the selvedge was part of the design. The bit of cloth around the edge of fabric was used to accentuate her sleeves. Normally, if it’s used, the selvedge is hidden in a seam.

The belt was lined with cream coloured cloth, stitched with ridges to keep it stiff. On it you can see machined lines running up and down.

A big piece of fabric, the map and edges covered her design so precious she kept it throughout all the years since.

We do not know, as their men returned, whether the women in their lives were told of the bravery that brought silk to their homes.

Stretched out across living room tables they traced patterns onto occupied nations freed from enemy hands.

Pausing for a moment, scissors made use of their gift. The map became cloth and cloth became clothing innocent of its original intent.

Valuable and rare, clothes made from escape and evade maps are a testiment to the men who survived and the sewing skills of the ladies waiting for their return.