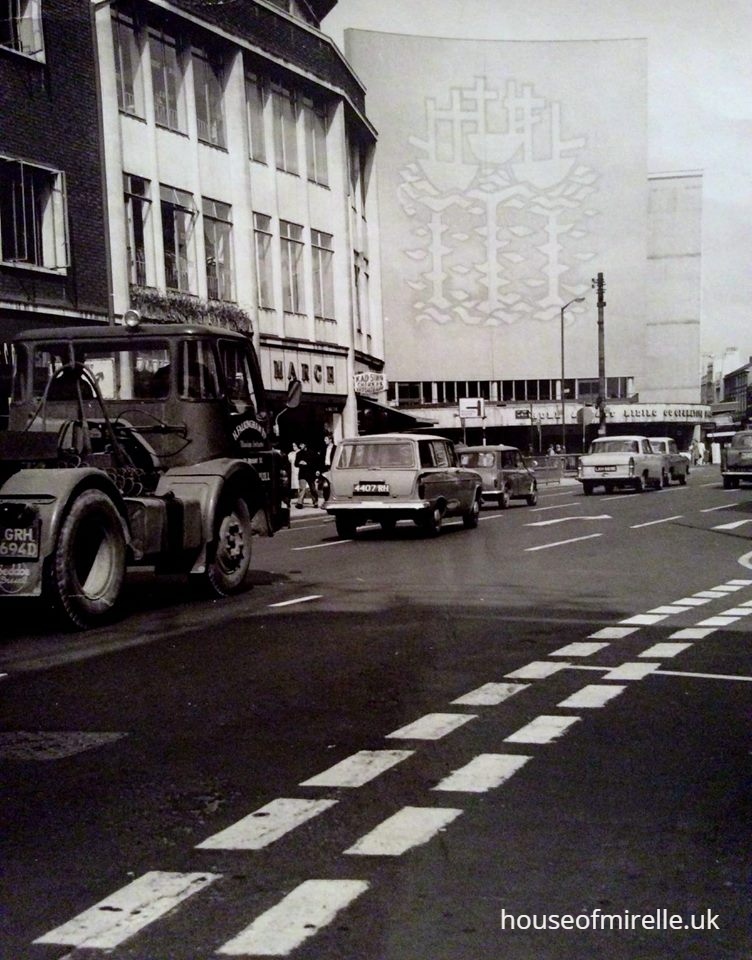 S.O.S. Give Your Memories Of Hull’s Co-Op BHS and 3 Ships Mural to SAVE OUR SHIPS!

As a child Esther’s father told his daughter stories of the deep sea waters he fished in and the rise and fall of the city of Hull that was their home.

Sipping cafe drinks they sat in front of a building so large its front curved all the way left and all the way right of her view. Shaped like a sail it was taller than her eyes could reach looking upwards toward the sky.

On it was a design, ‘the Three Ships,’ said her Dad.

Alan Boyson’s mural on the front of the Co-op / BHS building on Jameson St. corner rises up from a building part of the city’s landscape since 1963.

It is unapologetic and inescapable, a post-modernist interpretation of the city’s name and its legacy as Britain’s third port.

The letters spell Hull if you move a finger along the blue lines. H, U, L, L, and once there was a nightclub up there called the Skyline. Many people recall it because they had a great time above the building’s hallowed shopping halls.

Esther listened to her father weaving tales of the old city, trawlers and catches, the persistence of shipping fading in the docks close by as he talked.

In his words she learned there were two Hulls; the city she knew and another, the one he recalled. Although very different hers and his co-exist both equally valid and true.

People’s memories of Alan Boyson’s mural imbue it with meaning, a substance more than its bricks and mortar, concrete and mosaic design.

Meaning is given by the people who worked in the Co-op or those who went to the Skyline in the 60s, dancing at Romeo’s and Juliet’s twenty years later in 1988.

Clothes and items for the home are also artifacts of history bought in its shopping halls in the years before the building closed in 2016.

Over its doors a bright pink awning celebrated Hull 2017 also providing shelter for those sleeping rough in the city streets.

Then more recently it was announced the building would be demolished to create another shopping centre – Albion Square.

Albion Square will erase the building housing the Three Ships and Boyson’s other fish mural inside. Attempts to have the mural listed have so far been unsuccessful but that doesn’t detract from their importance.

Athough plans include them, the new shopping area’s vast sprawl will permanently erase the buildings of the past.

Esther understood the legacy created by people’s memories, after all they were special to her too and decided to use her talent to create a new archive, exhibition and documentary film.

Ann, Sandra, Val, Carole, Carole and Gillian, window dressers pictured in 1961 have already donated their memories and these photos and you can too.

On this page – click through this link – it explains the sort of items looked for. It could be a gig programme, a shopping bag, an item you bought there and it is about your memories too.

Collaborating with Untold Hull, recordings are being made of people’s voices that will become part of the city’s archive, exhibition and film.

Did you shop there, work there, go to the Skyline, dance at Romeo’s and Juliet’s or even have a feeling about the Three Ships that you want to set down

If your mind is full of memories, get in touch with Esther and the team and they’ll organise it for you. You’ll be asked to give permission for whichever way your voice is used.

Got any photos, clothes or fashion mementos?

The Co-op and BHS were open for a very long time.

Special occasions were held there, the Skyline Ballroom often hosted wedding receptions for instance. You might have photos of the it and Romeo and Juliet’s nightclub that can also be used.

Check your wardrobe. Have you still got something in there that could be displayed in an exhibition or used in the film. Do you have anything with a Co-op or British Home Stores label that could be used too.

Dressmaking fabric was sold at the Co-op and you might have used it to make your own clothes.

Go right to the back of your cupboards! The exhibition will happen towards the end of next year – 2020 – where fashions will be shown. 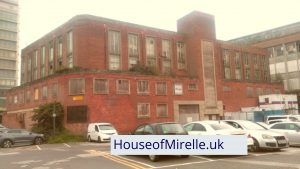 In February 2019 demolition started on the Edwin Davis building round the corner on Bond Street the first great destruction of the past to make way for the new design. Soon they both will be gone.

It might seem that what you have to say is insignificant but even the smallest memory or item will be welcome and useful.

If you think you’d like to add to the Ships in the Sky project get in touch with Esther and the team by following the links on the website.

Your voices and mementos will build a permanent archive and create a new piece of art about a building iconic to Hull’s past.

We noticed Esther had the same surname as Mirelle’s famous owner Mira Bibbero Johnson – but don’t know if they are related from way back then. We like that over its lifetime Hull has seen many people with the surname making their mark on the city – Archibald and Johnson’s printing firm for instance – just as now and in the future Esther’s Ships in the Sky project will have done.