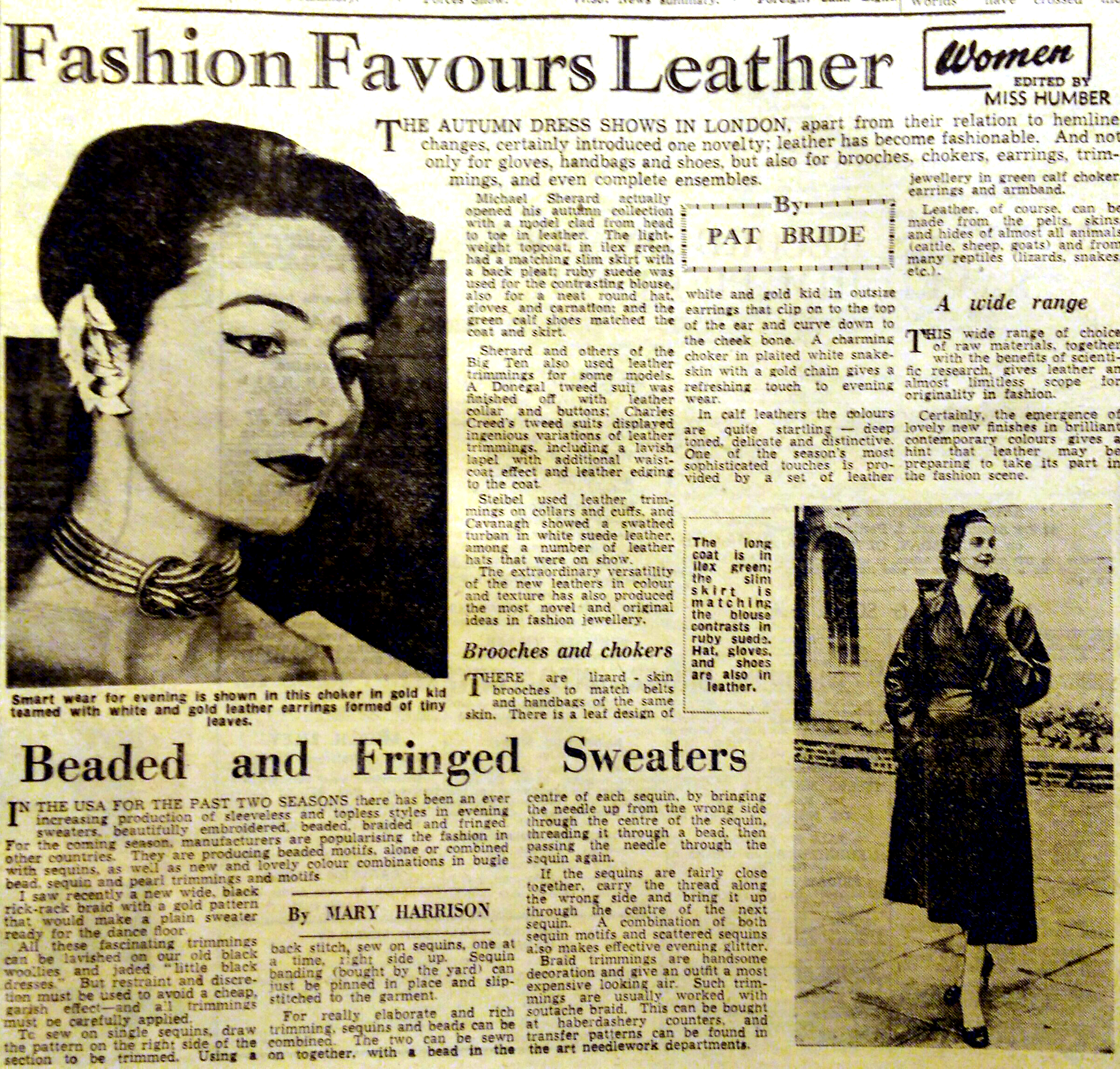 Everyone is at it! Using leather in their designs, that is.

The catwalks from Autumn Winter 2015 all the way through this year are filled with designers and fashion houses being inventive with leather. It’s everywhere and going to be a massive trend for 2016.

But did you know that the first leather trend in clothing happened in Autumn Winter 1953…?

Up until then, leather was used in accessories. If you had a handbag or gloves, they would almost definitely be leather and that’s not even including shoes which were leather through and through.

Michael Sherard – one of the ‘Big Ten’ fashion designers of the era and a member of the Incorporated Society Of London Fashion Designers – surprised the eager journalists of the time by opening his show with ‘a model clad from head to toe in leather.’

The article by Pat Bride in the Hull Daily Mail describes the outfit which is featured in a black and white photo.

‘The long coat is in ilex green, the slim skirt is matching the blouse contrasts in ruby suede. Hat, gloves and shoes are also in leather.’

If you are wondering what Ilex Green looks like, think of Holly. The dark, dark green and red touches in the trims would have made people think of Christmas instantly.

The article points out that the shades of leather were ‘deep toned, delicate and distinctive.’

They also say that with scientific advances ‘it gives leather an almost limitless scope for originality in fashion.’ How true!

The dramatic effect of this collection should not be underestimated. In the early 1950s, fashions were still conservative in comparison with what we are used to seeing now.

Women almost always wore skirts, jeans were not commonplace, the fashion for blouses was causing a stir and accessorising your outfit was key – hats, hats and more hats were all the range.

Teen-agers wore slightly different items than their mothers and fathers but they were still highly influenced by adult fashion.

Marilyn Monroe had just been voted an actress most likely to succeed and the bleached blonde sweater girl look was only a glimmer in the eye of fashion designers.

Paris was paramount, London was more formal and the influx of American fashions were yet to be on their way.

It was frowned upon to break the rules and leather on anything other than a bag, gloves or shoes was a stunning concept at that time.

In Hull, civic events, balls, dances and competitions meant one wore what was considered right for the event, not what you wanted to wear.

and Hull broke the story alongside London…..